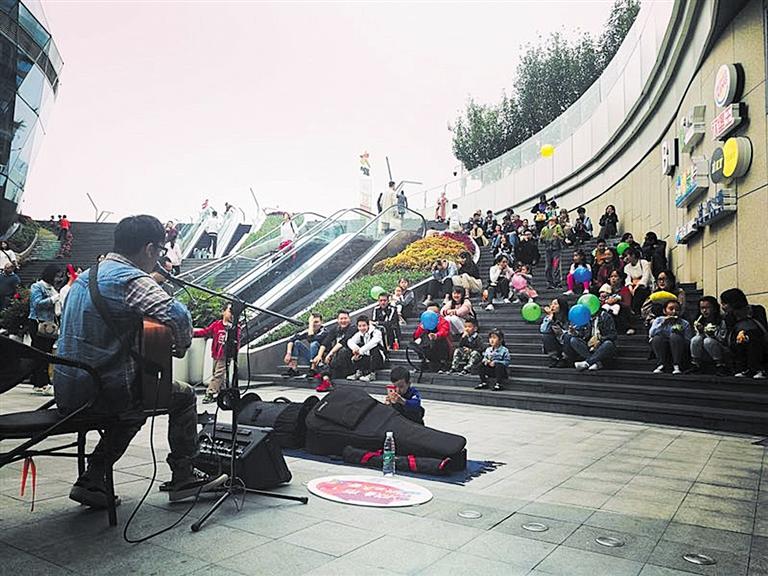 Street artists sing as a holiday scene in Chengdu

Yesterday was the last day of the National Day Mid-Autumn Festival. Museums in our city were very popular. The first Street Artists Music Festival is being held by local people and foreign tourists. From fine calligraphy and painting exhibition to bronze civilization exhibition, from gold ware exhibition unearthed before the 14th century in China to bonsai exhibition and street music festival... During the National Day Holiday, the major museums in our city presented rich and colorful cultural feasts for the citizens and tourists, making the museum the most popular place in Chengdu during the holidays. The street performers scattered in Chengdu streets and alleys made people feel a model of literature and art. According to statistics, more than 600,000 visitors were received by major museums in Chengdu during the seven-day National Day Holiday. During the National Day Holiday, more than 100 groups of street artists in Chengdu brought 308 performances to the public. It is estimated that more than 500,000 people watched the performances.

During the National Day Holiday, all the major museums in Chengdu opened the queuing mode. Both the bronze exhibition of Chengdu Museum and the gold exhibition of Jinsha Site Museum have won the admiration of local citizens and foreign tourists. He Zun, a national treasure engraved with the word "China", became a visitor to the blog, which stimulated the audience's enthusiasm to see the exhibition. Even if the audience stood in a long line for an hour with an umbrella, the audience would also have a glimpse of "Zun". The Golden Memory, a special exhibition of gold unearthed before the 14th century in China, is attracting the attention of many audiences. With an unprecedented scale of exhibits, a multi-domain perspective and thousands of years of time span, 350 sets of fine gold wares from 40 archaeological cultural and exposition units are dazzling. They have written a brilliant Chinese history in gold. The exhibition of "Shudao Searching for Ancient Stone Gate and Han Yun-Thirteen Pin Rubbings Exhibition of Shimen in Hanzhong" which is being held in the Museum of Wuhou Temple in Chengdu has become an unexpected pleasure for visitors to visit the Temple. Through three units of Shimen Cliff, Hanshang Mingtuo and Wuhou Old Road, the exhibition focuses on the fine rubbings of cliff carvings collected by the Museum of Hanzhong City. Let the audience see the historical evolution of Chinese calligraphy from seal to Li and from Li to Kai.

In addition, the second "Caotang Cup" held by Caotang and the 46th Bonsai Art Exhibition of Du Fu Caotang are the second exhibition after being awarded the title of Sichuan International Exchange Center by the International Bonsai Association (BCI). The number of bonsai exhibited in this exhibition amounts to more than 200 pieces, among which the main varieties of golden marbles with Sichuan characteristics are displayed. The golden autumn and October are the best time to watch golden marbles. The bonsai exhibited in this exhibition changes from green to red in the green leaves, matching red and green, with iron-dried twigs, full of vitality. When the audience comes to the grass hall, they also have the opportunity to see the excellent bonsai masters create bonsai on the spot and experience the artistic charm of transforming decay into magic.

Yesterday, the first Chengdu Street Artists Music Festival ended perfectly. The Music Festival has a cumulative performance of more than 600 hours. Street artists accompany Chengdu citizens and tourists with their own songs in the streets and alleys, bringing you an unforgettable National Day holiday.

Street artists have been performing in Chengdu for five months, and they have been widely welcomed by the public. Many artists have told reporters touching stories between them and the audience. The artist Shi Jiajiajia's first street performance was on Yulin West Road. Near the pub, many tourists were singing Chengdu. She was very nervous about the unfamiliar lyrics, but the audience didn't mind at all. She was accompanied by some singers. "At that time, the street lamp was not very bright, and many of the audience turned on their mobile phones'flashlights to illuminate me." Bright, the stars are really beautiful, let me very unforgettable. She told reporters. Li Ruolun, an artist singing in the broad and narrow alleys, also met loyal fans. A tourist from northeast came to hear him sing every day. "They came to Chengdu to play and asked me where to sing every day. As long as I sang, they must come to listen."

Similarly, street performers are paying more and more attention to street performances. Although it is a temporary stage, they also cherish it very much. In the eastern suburbs, the performers Guang Mi group, who performed in the evening, also brought a series of night lights, they said, in order to create a better performance atmosphere. Their songs are more romantic, surrounded by balloons and stars. There are also performers who bring their friends to help them in their performances, distribute balloons and flags to the audience, and make the street a small concert scene.

During the first Street Artists Music Festival, in addition to offline performances, there was also a voting campaign for "Praise My Music" held on the "Culture Tianfu" Wechat Public Number. The performances received the most direct praise from the audience. Up to the time of press release, 420654 people participated in online voting activities and voted 498727 for their favorite street performers.

"When we were performing, many audiences were voting for us. Not only did they vote for us, but they also forwarded it to their relatives and friends to help us canvass for votes, so that we could get so much praise. It's really very happy." Artist fairy group told reporters. They also hope to get the chance to stand on the stage of Chengdu International Music Season in the autumn of Chengdu by voting. The seven-day National Day holiday is over, and the first Chengdu Street Artists Music Festival is also a perfect ending, but Chengdu people's dedication and love for music will continue to play.