"Autumn of Rongcheng" The 2nd Jinfurong Music Competition was held in Chuanyin yesterday. 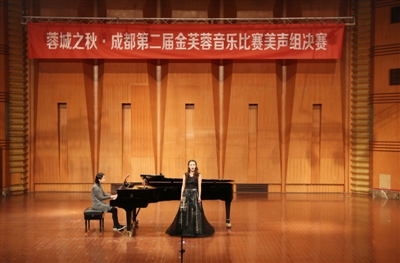 The Final of Bel Canto Group

Gu Ping, director, professor, famous tenor and music educator of the Department of Vocal Music and Opera of Shanghai Conservatory of Music, served as the group leader of the evaluation committee of the vocal bel canto group in the Jinfurong Music Competition. He told reporters that this year is the second Jinfurong Music Competition and its influence is expanding. In terms of the evaluation criteria of the final, the voice, technology and state reflected in the performance will be the main, while the style, language and stage presentation effect of the work will be taken into account comprehensively. In this competition, a lot of strong players emerged. Judges of Gu Ping, who participated in many international competitions, praised them repeatedly. They hope that these excellent players can continue to shine on the music stage. One of the Three Tenors from Hong Kong, China, Vice-Chairman of Guangdong Musicians Association, Visiting Professor of Shanghai Conservatory of Music, and famous opera performer Mo Warren served as the judges in the finals. Movaren, who had been to Sichuan many times before, participated in the Jinfurong Music Competition for the first time this year. Several excellent players also impressed him deeply by their singing. He believes that the Jinfurong Music Competition is not only helpful to Chengdu, but also a good opportunity for young players. It is also beneficial for teachers and students in Sichuan Conservatory of Music, which is well-known in the field of music in China.

The finals invited leading figures from foreign music fields to serve as judges. Ms. Marina Lapina, a professor at Tchaikovsky Conservatory of Music, a famous Russian opera singer, a soloist at the Moscow Grand Theatre and a Russian meritorious artist, is one of the judges. In an interview with reporters, Ms. Marina said that although she had just arrived in Chengdu on the eve of the final, she had not yet been able to feel Chengdu carefully, but she had loved the environment of Chengdu and the city culture reflected by the trees on both sides of the road. She was impressed by the amazing singing of several tenors in the Jinfurong Music Competition. Professor of Florence Conservatory of Music, Italy, and a famous soprano singer, Ms. Donatella de Polini, who has held individual concerts in Italy, France, Germany, Hungary and other countries, is also one of the judges of the final. This is the first time that Ms. Donatella has come to Chengdu as a judge of a music competition. Compared with other cities in China, Chengdu has more cultural characteristics. "I am very happy to have met many singers and educators with great accomplishments in music in this music competition. I hope that this music competition can become a musical link for everyone to exchange and promote the music communication between the two places.

After the final of the vocal bel canto group yesterday, the final of the vocal national group will continue to be held today. According to previous competition arrangements, in order to make the finalists fully prepared, yesterday afternoon, the organizing committee arranged excellent artistic guidance for vocal music ethnic group players, Teacher Kong Lei, to accompany. Kong Lei said that he has been an art director at Sichuan Conservatory of Music for more than 10 years. He is very happy to have so many players who love national music through his accompaniment with the contestants. Many of them have beautiful voices. At present, the differences between the players are mainly focused on Running-in and details. This is the only way for the development and growth of the players. I hope that the players can accumulate experience and maintain their love for music through this competition.

Pictures provided by the organizer