Music always holds the pulse of the times best. This golden autumn, "Chengdu Autumn" Chengdu International Music Season was held in Chengdu. On the evening of November 9, the performance of the "Golden Furong" Music Award Presentation Ceremony and the closing performance of the 24th Chengdu International Music Season of "Rongcheng Autumn" drew a successful conclusion to the 24th Chengdu International Music Season of "Rongcheng Autumn". From the opening of September 22 to the closing of November 9, in 48 days, the "Autumn of Chengdu" presented more than 200 music theme performances and outdoor music activities for Chengdu citizens, creating a concert and popular festival with the participation of the whole people and blooming everywhere. 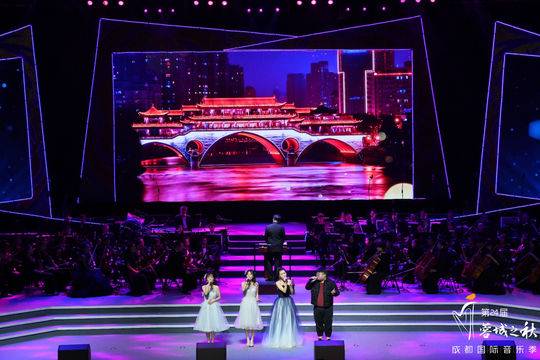 In order to build the professionalism and authority of the "Golden Lotus" music competition, more than 20 authoritative experts in the field of music at home and abroad were invited to serve as judges. Marina Mikhailovna Labina, an opera singer from Russia, tells about the "golden lotus" in her heart. "It's a great pleasure to be here with artists, singers and musicians from all over the world. Chengdu is a deep, charming and vibrant city. In just a few days, together with judges from all over the world, I heard amazing and wonderful songs in concert halls. I met the most simple and pure singing in the street. The music lit up every corner of the city and lit up the autumn of Rongcheng. Zhao Jiping said through VCR, "Thank the Chengdu Municipal Government for granting me this honor. I hope to contribute my strength to the music industry in Chengdu and help the development of the music industry in Chengdu." He said that Chengdu is a city with cultural connotations and is endowed with unique advantages in the development of music culture. "If we tap its connotation and mobilize the masses of people to nourish music and music culture, we will like it better."